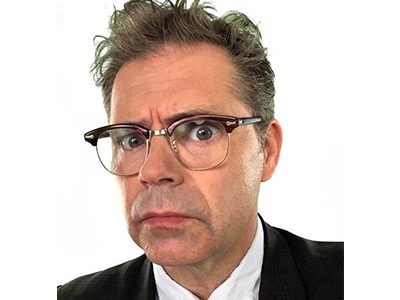 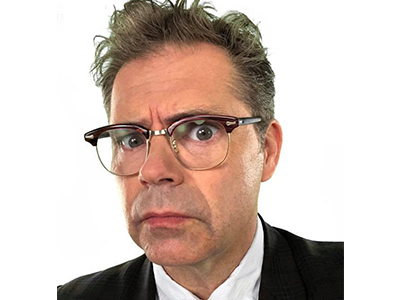 Dana Gould began his professional comedy career at the age of seventeen. Between Comedy Central, HBO and Showtime, Dana has six solo stand-up comedy specials to his credit. He has appeared on THE LATE SHOW WITH DAVID LETTERMAN, JIMMY KIMMEL LIVE, CONAN, MARON As an actor, Dana has had memorable turns on SEINFELD, PARKS AND REC, is one of the few actors to play his live-action self on FAMILY GUY. He was a cast member of Frank Darabont’s 1940’s crime drama MOB CITY, in addition to numerous roles in films such as 2016’s cult horror anthology SOUTHBOUND. Speaking of horror anthologies, (and we were) Dana also recently completed filming CREEPSHOW for AMC’s Shudder platform.
Dana was a writer/performer on the original BEN STILLER SHOW and maintains an equally active career as a writer. After creating the pilot WORLD ON A STRING (with The Simpsons’ Jay Kogen), he co-created MTV’s late, lamented SUPER ADVENTURE TEAM with his old Ben Stiller office-mate Rob Cohen. Dana then joined the staff of THE SIMPSONS, where he was a Co- Executive Producer and performed several voices for the show. He was also a producer on NBC’s PARKS AND REC.
Dana is the creator and executive producer of the IFC horror-comedy STAN AGAINST EVIL starring John C. McGinley. STAN AGAINST EVIL premiered in October of 2016 to strong reviews and stronger ratings. STAN AGAINST EVIL ran for three seasons on IFC.
In addition, Dana recently developed a hour-long series based on Steve Niles’ comic book series THE OCTOBER FACTION for NETFLIX, and his graphic novel adaption of Rod Serling’s original draft of the screenplay for PLANET OF THE APES is now on the shelves from Boom! Comics.
Despite all this, stand-up remains a focal point of Dana’s career, and he continues to perform regularly across the country. His monthly podcast, THE DANA GOULD HOUR, frequently resides in iTunes’ top ten comedy downloads. In 2017, Dana released MR. FUNNY MAN on Kill Rock Stars, a predominantly indie music label. MR. FUNNY MAN, Dana’s first comedy album since 2015’s I KNOW ITS WRONG, debuted on iTunes comedy chart at #1.